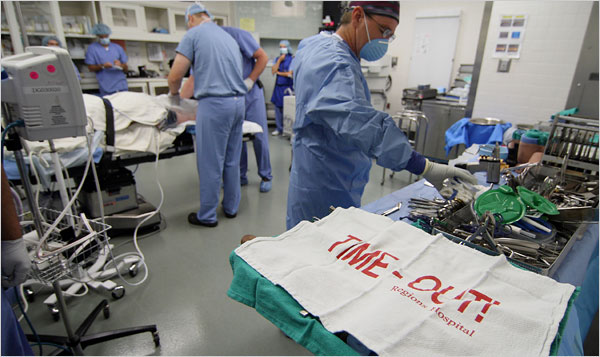 Medicare will no longer pay for preventable injuries also known as “never events”.

ST. PAUL — If an auto mechanic accidentally breaks your windshield while trying to repair the engine, he would never get away with billing you for fixing his mistake. On Wednesday, Medicare will start applying that logic to American medicine on a broad scale when it stops paying hospitals for the added cost of treating patients who are injured in their care.

Dr. Peter Cole with Cynthia Kehborn prior to her surgery at Regions Hospital in St. Paul, Minn. Mr. Cole’s initials are written on Ms. Kehborn’s leg to indicate which ankle to operate on.

Medicare, which provides coverage for the elderly and disabled, has put 10 “reasonably preventable” conditions on its initial list, saying it will not pay when patients receive incompatible blood transfusions, develop infections after certain surgeries or must undergo a second operation to retrieve a sponge left behind from the first. Serious bed sores, injuries from falls and urinary tract infections caused by catheters are also on the list.
Officials believe that the regulations could apply to several hundred thousand hospital stays of the 12.5 million covered annually by Medicare. The policy will also prevent hospitals from billing patients directly for costs generated by medical errors.

Preventable Injuries According to Medicare

Because Medicare is the largest insurer in the country, its decision to refuse payment for preventable conditions has already influenced others — public and private — to set similar criteria.

Over the last year, four state Medicaid programs, including New York’s, have announced that they will not pay for as many as 28 “never events” (so called because they are never supposed to happen). So have some of the country’s largest commercial insurers, including WellPoint, Aetna, Cigna and

Blue Cross Blue Shield plans in seven states. A number of state hospital associations, including here in Minnesota, have brokered voluntary agreements that members will not bill for medical errors. In April, Maine became the first state to ban the practice statutorily.

The Congressionally mandated Medicare measure is not projected to yield large savings — $21 million a year, compared with $110 billion spent on inpatient care in 2007. But it carries great symbolism in the Bush administration’s efforts to revamp the country’s medical payment system, which has long been criticized as driving up costs through perverse incentives that reward the quantity of care more than the promotion of health.

The real money, many health economists believe, may come from reorienting the payment system to encourage prevention and chronic disease management and to discourage unnecessary procedures. The two major-party presidential candidates support such a realignment, a rare point of consensus in a polarized health care debate.
“This is a specific case of the larger pay-for-performance trend, the idea that you should pay more for quality than lack of quality, or in this case pay less for defects,” said Dr. Donald M. Berwick, president of the Institute for Healthcare Improvement. “This whole trend is like a juggernaut, and it is not going to stop.”

Medicare does not pay for “PREVENTABLE INJURIES” in Hospitals